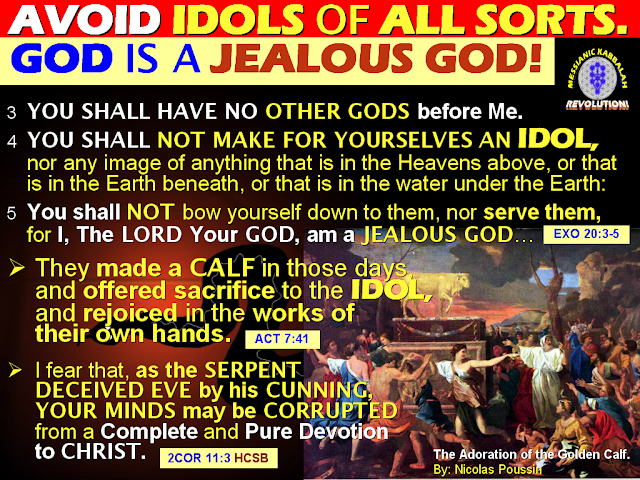 The ZOHAR definition of Idol Worshipping includes much more than simply praying to statues or other false gods. Whenever we allow an external Object, Person, or Event to control our Behavior, Thoughts, or Emotions; we are worshipping an idol. Many people, for example, worship money as an idol (1Timothy 6:10, 2Timothy 3:2). They are disciples and servants to their own businesses. Others are controlled by APPEARANCES and the ACHIEVEMENTS of people around them. Every time we allow the external world and forces to control our hearts and minds, we are committing the sin of Idol Worshipping.

By: LOPE COLUMNA
MESSIANIC KABBALIST-PASTOR GENERAL
The BRIDE OF CHRIST, MINISTRY OF LIFE

People today are provoking God to JEALOUSY with their newly invented idols and gods. Entrepreneurs even make IDOLATRY a BIG Business, creating many IDOLS in the field of Sports & Entertainment and Marketing/Advertisements. One classic example is the popularizing of the very word “IDOL” that God hates. So, we heard the popular TV Program of AMERICAN IDOL and IDOL Philippines. People spend (sacrifice) their time, money, emotions, and other resources in serving (worshipping) these many MODERN IDOLS of Idolatrous Society!


WHAT IS AN IDOL?

IDOL, n. [L. idolum; Gr. form or to see.]
An idol is any thing or anyone which usurps the place of God in the hearts of his rational creatures.

WHAT DO YOU MEAN, IDOLATRY?


1. The worship of idols, images, or any thing made by hands, or which is not God.

Idolatry is of two kinds; 1) the worship of images, statues, pictures, made by hands; and 2) the worship of the heavenly bodies, the sun, moon and stars, or of demons, angels, MEN and animals.

2. Excessive attachment or veneration for any thing, or that which borders on adoration.


AS IN THE DAYS OF THE GOLDEN CALF
AVOID IDOLS OF ALL KINDS, BECAUSE GOD IS A JEALOUS GOD!
BUT THE PEOPLE OF THE WORLD, INCLUDING MANY CHRISTIANS AND JEWS SERVE THESE FORBIDDEN IDOLS! 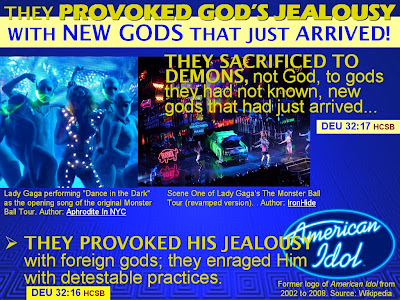 The world has many other idols in the personage of many celebrities: Sports Stars, Rock Stars, Movie Actors/Actresses, Singers, Politicians, and other idolized entertainers. And people serve them!

All the above idolatrous practices provoked God's jealousy.
THEREFORE, THEY IGNORE AND FORGOT THEIR FATHER IN HEAVEN!

With the emotions, thoughts, time, money, and resources seduced by these newly invented gods and idols; the people, especially the youth, ignored their Creator, and forgot the God who sustains them and gave them their life, talents, and resources. Instead, they shout, scream, and do many things that pertains to worshipping an idol, their many idols literally!

ENTERTAINMENT BY IDOLS PUT A SINFUL STUMBLING BLOCKS BEFORE THE FACES OF PEOPLE, CORRUPT THEIR MINDS, AND SEPARATE THEM FROM GOD ALMIGHTY!
GOD'S PUNISHMENT TO CHRISTIANS AND JEWS THAT ARE HOOKED BY THE IDOLS OF THIS IDOLATROUS WORLD

WARNING TO ALL IDOLS AND THEIR MAKERS; TO THOSE WHO BENEFITTED FROM THE MULTI-BILLION DOLLAR INDUSTRY OF IDOLATRY OF THIS WORLD
THEREFORE, REPENT AND FLEE FROM IDOLS AND IDOLATRY!
For more revelations, go to the following articles:

1. UNDECEIVE YOURSELF FROM THE GRACE OF DECEPTION AND DARKNESS! Today, Billions of Christians Are Deceived To Destruction and Death With The False Grace That Pastors, Priests, Evangelists, and Churches Are Preaching
2. YOUTH WASTE THEIR LIVES. THEY PROVOKE GOD'S JEALOUSY WITH NEW IDOLS AND FOREIGN GODS. They Sacrificed to Demons, Not God. To New Gods That Had Just Arrived...(Deu 32:16-17)

NOTE: Bible verses used in this article is based on the Holman Christian Standard Bible (HCSB). If not, the quoted translation is indicated.

Copyright 2012, 2019 © LOPE COLUMNA
GOD'S 21st CENTURY END-TIME MESSENGER and BIBLE EXPLAINER
The WORLD'S ONLY END-TIME PREACHER OF THE EVERLASTING TRUE GOSPEL OF
MESSIANIC KABBALAH WISDOM OF THE KINGDOM OF GOD

For Donations, Offerings & TITHES to Expand This End-Time ELIJAH Work of God. Please Deposit To: